by Joseph Scrimshaw and Friends 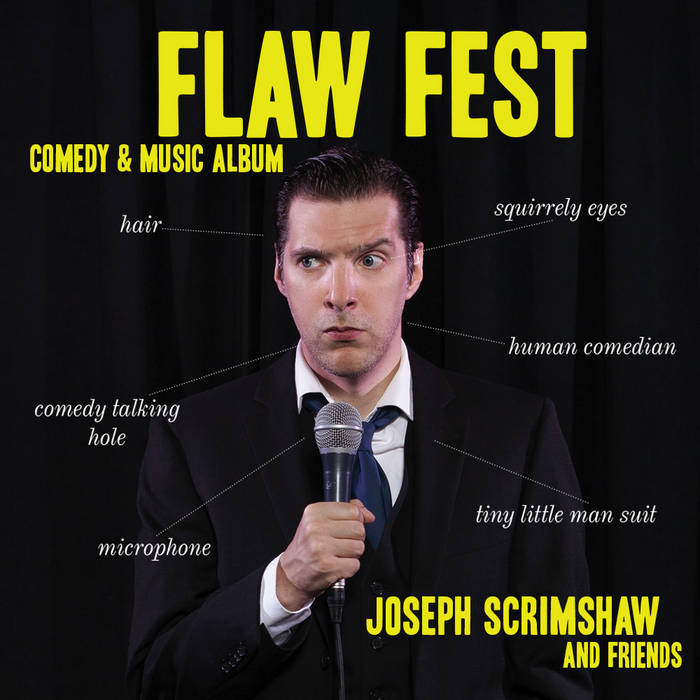 “I am glad that Joseph Scrimshaw has the power of thought and audible speech, or else this very funny album would not exist.”
-John Hodgman

FLAW FEST is a live comedy album full of fun comedy jokes about horrible human flaws PLUS a bonus album of awesome songs inspired by the comedy show.

The comedy album details all my most entertaining flaws: a sloth driven obsession to play bad James Bond video games, a stubborn need to fight with large animals, the idiocy to drink something called a Watermelon Shooter, the hubris to write a rock n’ roll song about a helium balloon, the mysterious need to watch The Phantom Menace on purpose, and much more. Plus a cameo by my pals Bill Corbett and Kevin Murphy of RiffTrax!

The album and the show mean a lot to me. The comedy show was first performed on Jonathan Coulton’s JoCoCruiseCrazy in February of 2013. Huge thanks to Jonathan and all the “Sea Monkeys” for the opportunity and great response.

The musicians on the cruise said nice things about the show and it made me think, “Hey, what if a bunch of musicians wrote songs inspired by the comedy show?”

In May of 2013, we launched a Kickstarter project to fund the recording of the comedy album and pay the musicians to write all the awesome songs. Gargantuan thanks to all who funded the album.

The comedy album was recorded live at The Bryant Lake Bowl in Minneapolis, Minnesota in September of 2013. Ginormous thanks to the staff of the Bryant Lake Bowl, the friendly laughing audiences, and the audience volunteers featured on the final album: my mean eggs wife Katie Sisneros, my big eggs daughter Justin Roggenbuck, and my extra eggs wife Eric Stephen.

Finally, UNFATHOMABLY LARGE thanks to my wife, partner, and co-producer of this album, Sara Stevenson “Wife Head” Scrimshaw.

I hope the comedy and the music makes you laugh, think, rock out, and soft rock out. But more than anything, I hope you'll have fun celebrating the idea that we're all flawed and that's okay. Stupidly, hilariously okay.

A Flawed Thanks,
Joseph Scrimshaw

“Listen, we all have our own ‘I french kissed a bear’ stories.
But Scrimshaw’s is really funny.”
-Jonathan Coulton

Joseph Scrimshaw is a comedian, writer, and squirrel enthusiast described by a fan on Twitter as "geek flavored." He's written for Adult Swim, RiffTrax, Screen Junkies, and more. He’s performed at SF SketchFest, Jonathan Coulton’s JoCoCruise, theaters, bars, and conventions across the country. He hosts Obsessed Podcast, co-hosts the ForceCenter Podcast Feed, and spends too much time on Twitter. ... more

Bandcamp Daily  your guide to the world of Bandcamp

New sounds from Mavi, Ivy Sole & Moderator, plus AJ, the One joins the show, for her latest release